“This is environment and sustainability. Investing in sustainability is creating wealth, skilled labour, with industrial investments”

“This is environment and sustainability. Investing in sustainability is to contribute to our well-being, to our health, to the capacity of the human species to live for many millennia on Earth. But investing in sustainability is creating wealth, creating skilled labour, creating possibilities to distribute this wealth and create well-being, through industrial investments», highlighted João Pedro Matos Fernandes, Minister of Environment and Climate Action, on today’s visit, December 10, to CSWind ASM, based in the Port of Aveiro, which produces wind towers and offshore foundations. João Galamba, Secretary of State of Energy, who also joined this visit.

After a guided tour of the factory, Adelino Costa Matos, CEO of CSWind ASM, gave a brief introduction about the company, going back to its origins and the continuous evolution of the business and its investment. “We managed to transform a sector with a lot of potential by creating high internal know-how. Portugal began to have production capacity and know-how and also began to export afterwards.”

«From 2015 onwards, we started a new transformation cycle, in which we decided to invest 35 million euros in Sever do Vouga to increase the capacity of the onshore wind towers and also in this offshore plant, like few in Europe. We are proud to be able to produce big wind towers here as few companies manage to do, and we set this goal of, over next 10 years, starting in 2015, we will achieve 100 million euros of turnover. In fact, it won’t be in 2025, but in 2022», revealed Adelino Costa Matos.

«It was a path of diversification of customers, product, modernization and training. And six years later, here we are in the Port of Aveiro, which has a strategic location, with enormous potential. Look at this industry and create national value, ensuring that the know-how is in our country», stresses the CEO of CSWind ASM. «We also partnered with CS Wind Corp., which is the world’s largest manufacturer of wind towers, and which acquired the majority of the company’s capital, to strengthen our investment capacity and become the largest and best manufacturer in Europe, through Portugal, through the Port of Aveiro», highlighted Adelino Costa Matos.

“We intend to invest 260 million euros in the Port of Aveiro over the next four years and triple the capacity to manufacture wind towers and foundations.”, stated the CEO. Finally, he addressed a few words to Minister Pedro Matos Fernandes and Secretary of State of Energy João Galamba. “I want to thank you for your service to the country, not only for what you represent, but above all for having acted in a strategic way in the area of energy transition, climate action and energy. Congratulations on the dynamics that you have imprinted in this sector in recent years, all your resilience and all your strategic sense. Portugal cannot be left behind, it has to lead and replicate the success stories, creating value in our country.”

João António Campolargo, Mayor of Ílhavo, congratulated the vision that the Port of Aveiro has of becoming a hub for accelerating industrial and logistical economic activities. «All these industrial players gain a new dynamic here with the presence of our Port of Aveiro. Industries bring new businesses, new challenges, generate value and, one important thing, jobs, in this case in the next three years, which I like very much.”

“In the future, there is an auspicious program, with the steel industries, in the field of producing complex systems that are more environmentally friendly and which will continue to use maritime transport and eliminate some road transport”, stated João António Campolargo. «Today, in this company, I want to value the work that is done here and its possibility of expansion. We are proud to welcome this investment and our partner, CSWind ASM, a company we had already chosen in 2019 and looks forward to a very auspicious presence until 2028. And very important to our Minister, we have a great contribution here to the goals defined in the COP26, and I think it is well defined here that Portugal wants to produce and be at the forefront of these participations», shared the mayor of Ílhavo.

“I hope that this strong investment of 260 million euros will bring benefits for everyone, especially economic and environmental. We believe that this combination of entrepreneurs, our University of Aveiro and the role of the Port of Aveiro, will allow us to maintain a new coastline and a happy view”, concluded the mayor.

The Minister of Environment and Climate Action began by saying that “I am sincerely convinced that one of the reasons why this Korean company, a leader in the world, came to Portugal obviously has to do with the know-how that this company already had, and that ASM has always had the professional and market-winning ability. But I want to believe that it wasn’t just that. Which was also due to the fact that investors look to Portugal as a leading country in this transition, which is firmly committed to these investments, which will make many of these investments and be a client of many of these towers that are made here, which gives all the stability to the investments that they are made for the sustainability of Portugal and the world» considered the minister..

Pedro Matos Fernandes still left the challenge. “It is increasingly useful to realize that people, institutions, port administrations, local authorities and new entrepreneurs recognize that Europe must be at the forefront in the fight against climate change. That this has enormous environmental value, but that it also has enormous economic value. And that we are the most ambitious in terms of goals, speeches and in practice, will make Europe lead the world in what will be the main tool for economic growth and investment, which is the fight against climate change.”

“Very lucky for the factory, very lucky for Ílhavo, very lucky for the future investments that will be made, and for the Port of Aveiro, which is increasingly finding its vocation here, to have a generous space on the land where cargoes such as these, so special and technical, can be loaded directly”, concluded the Minister of Environment.

The program ended with the unveiling of a plaque commemorating this visit by Pedro Matos Fernandes to CSWind ASM facilities. 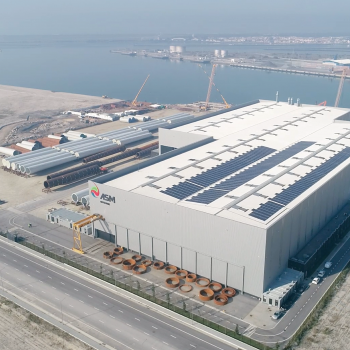